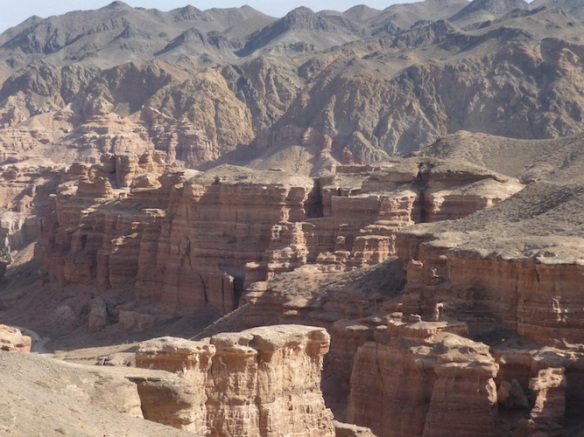 Driving east out of Almaty to visit Choryn Canyon, a sort of mini-me Grand Canyon that is the southern Kazakhstan tourist must-see, a navigational miscalculation by our guide/minder took us 100 kms in the wrong direction. Olga is a good-looking woman with an impressive level of self-confidence not quite matched by her practical abilities. As we approached the Chinese border she grew uncharacteristically quiet and started fiddling with her map. We noticed that the unremarkable road across bare steppe suddenly widened into a smooth six-lane highway with unusual markings on the tarmac, and did a shamefaced U-turn. It transpires that in Soviet days this road so close to China was intended to double as a landing strip for aircraft and troops in case of international dispute.

The Canyon, when we finally found our way to it, was fairly spectacular although perhaps not worth quite such a long detour. We would have liked a longer walk amongst the wind sculptures, but another five hours’ drive to the Kolsai Lakes lay ahead. It was dark when we arrived at a cluster of primitive cabins above the first of three mountain lakes. The spartan little rooms share bathroom and cooking facilities. Our fellow residents were a pair of retired Kazakh army generals (‘very big people’ said Olga, impressed) and an ambiguous lady who slipped out of the room whenever a camera was produced. They were a jolly and overpoweringly hospitable trio, although the senior General exhibited a touch of steel when we tried to refuse yet another round of vodka toasts. To International Friendship! To England! To Kazakhstan! Five or six large vodkas in 40 minutes is way above my grade, and it wasn’t easy afterwards to do justice to the dinner they insisted we share with them. Horse steak, calf’s tongue, Russian sausage, spiced potatoes, pickled carrots – very good, though. Again, to International Friendship!

We had two days of brilliant hiking in the high mountains that form the border with Kyrgyzstan, climbing between huge spruce trees and picnicking beside the glassy lakes with the perfect reflections of golden birch trees. Poor Olga developed blisters an hour into the first morning, and wasn’t able to come out again. There was no one about except us, although the weather was perfect – cool and clear, with scented days and chilly nights electric with stars.

Then last night a really bad thing happened. I sat on my Kindle and broke it. This isn’t even the first time – two years ago I made exactly the same blunder on a yacht sailing to South Georgia. At least I had the boat’s library to fall back on last time, even though it consisted mostly of biographies of Nelson. Now the only reading material I have to see me through nearly a month on the road is the Lonely Planet Guide to Central Asia. So if anyone doesn’t feel like shelling out 20 quid for the guide itself, I can advise on where to find a cheap pizza in Tashkent because I’ll have it off by heart by then. Actually, I felt so miserable when I did it that if I’d had a gun I would have shot myself. All those downloaded books I was looking forward to…

BUT it does make me think how wonderful a real book is. You can sit on it, prop up a chair with it, stand your cup on it, even fall asleep and drop it in the bath and all it needs is a few hours on the radiator to fix it.

Now we are back in Almaty for a last night at the No-View Hotel – otherwise known as Hotel Nyet, or the Otrar. Tomorrow at 6 a.m., Olga will pick us up for the airport. Or the Farmers’ Collective, or the road to Omsk, wherever her quirky sense of direction will lead. On our way to Tajikistan!

3 thoughts on “Bookless in Asia”