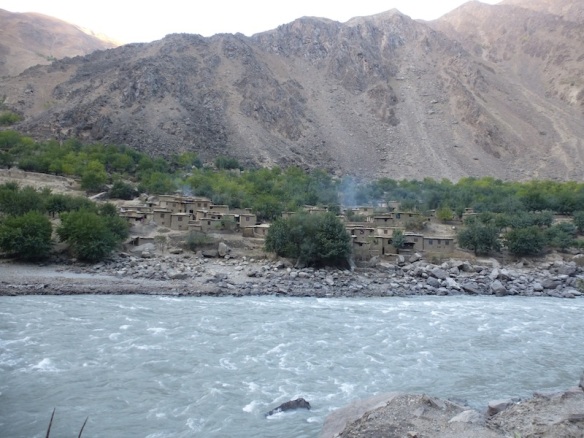 We were woken up at 5.15 this morning by Oris knocking on the door. The road out of town was going to be closed at 5.30 as part of the security for a visit from the President. There’s an ‘election’ next month, and he is out showing himself to the people. Unluckily for us he’s following the same route as we are, but as he travels by helicopter he tends to arrive first. So all the hotel rooms are commandeered for his entourage – 400 people, because he likes to bring all his ministers and committee bosses with him. That’s why we were in a downscale homestay last night in Khalaikumb rather than the pretty guest house we’d booked, and the reason why our plans have all gone awry. We can’t make new ones either, since the President decides his movements on a whim so no one knows where he’ll be heading next.

We had planned to treat ourselves to a couple of nights in one of the Aga Khan’s chain of lovely Serena Hotels here in Khorog. Booked it weeks ago. BUT the entourage has taken over the whole hotel and we have been sent off to a lowly spot down the hill as befits our tourist status. It doesn’t matter at all, considering what we have seen today. We have been driving along the fabled Oxus river (to reach this is quite something, as Great Game enthusiasts like me will well know).  Thirty yards away are the mud villages of Afghanistan, as in the picture.

1 thought on “On the banks of the Oxus”