A quick dash through Uzbekistan, and no particular desire to linger. The route led from the border southwards to Termez, an ancient Silk Road city facing Afghanistan again across the Oxus.

It has a faintly threatening feel to it now, due to the smuggling problem, and to other tensions I can only guess at. There was a family celebration going on at the neon-lit cafe where we ate our shashlik dinner and though it seemed jolly at first there was an uncomfortable insistence that we join the party. Bottles of beer appeared on our table and a mother and son sat down and demanded we drink toasts with them. ‘To Uzbekistan!’ We did our best, then the woman dragged me on to the dance floor, hanging off me as she swayed to the music. It’s very unusual indeed in a Muslim country to see a woman drunk in public. It was a relief to slide away into the darkness and trudge back to the comfortless ‘hotel’ for the night. 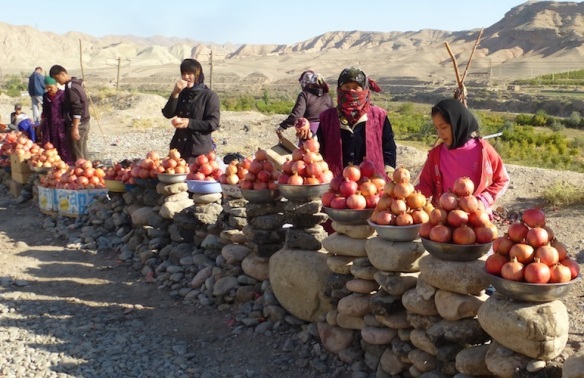 Things didn’t improve much the next day, as we made a northwards turn to head up through the barren centre of the country. It’s a hot and desolate place of scrub, dust, broken-down concrete buildings and marching pylons. Most of the sparse traffic is heavy container trucks and at the police ‘registration’ points along the road these and the few private vehicles are pulled over to be searched for drugs and arms. At one of these points a policewoman tipped the contents of my bag on to the floor and stirred through them, then body-searched me, making mocking gestures to indicate my scrawnyness to her ample companions as she did so. Thinnist policing in action. Who wouldn’t have shed a a pound or two after a month on the Central Asian diet, I’d like to  know? (It’s a no choice option of mutton followed by more mutton, if anyone would like to give it a try).

We did stay in beautiful Bokhara which made up for everything, although the ancient Lyabi Hausz cistern at its heart has acquired fairy lights in the trees and coloured fountains since my last visit. And there were busloads of tourists. (I know! I’m a tourist too!! But afflicted with traveller’s snobbery because we haven’t met anyone else along our eccentric route since Gillian all the way back in Ishkashim). At least in the Bokharan fleshpots we were able to enjoy a bottle of wine-style beverage, from Moldova, with the shashlik.

Next morning we were at the border with Turkmenistan. The two frontier posts are separated by a kilometre of dusty no-man’s land, and at either side an endless queue of steaming and hissing trucks waiting to make the crossing. Apparently this can take up to a week. We were much luckier – only two hours.

And then we were in Turkmenistan.

It’s not known as the North Korea of Central Asia for nothing.

2 thoughts on “Out of Uzbekistan”