I have just come back from Bhutan.

The Himalayan cold combined with three weeks of hiking uphill for six to nine hours a day and camping above 15,000 feet have contributed to a startling weight loss. Looking in the bathroom mirror this morning I’m wondering where my cleavage went.

But it was worth it!

We did a version of the renowned Snowman Trek which took us up into the Lunana mountains bordering Tibet, right beneath Gangar Puensum which is the highest unclimbed peak in the world. There is a settlement up there called Thanza, home to the Lunap tribe, which is seven days’ hard walk in any direction to the nearest road head. But in fact it’s not as primitive as it might appear. For one thing there’s a strong mobile phone signal, a key part of the flood warning system in the event of the huge natural dam breaching and threatening lives and historic buildings further down the valleys. It felt weird to lie in my tent looking out at what felt like the end of the earth, whilst chatting to my family on my iPhone (kept fully charged, along with my other i-devices, by my portable solar panel. The tech stuff worked!) 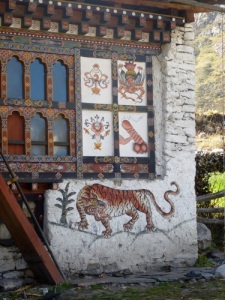 There’s also a prosperous economy in Thanza that isn’t based on yak herding or high altitude farming. It’s all down to the cordyceps.

The guide books (mistakenly) describe this strange caterpillar/fungus symbiosis as Himalayan Viagra. In fact the Chinese believe it has all kinds of beneficial medical properties as well as the obvious, and they pay thousands of dollars a gram for it. The Lunaps, and some of our camp crew as well, make a good living from searching out this tiny growth and selling it across the mountain border. The valley’s Mr Big, who also holds the monopoly in Yak Services, owns a huge gold-coloured Toyota SUV on the collective proceeds. Although what use this is to him when it’s 7 days’ walk before he can even turn the key in the ignition, was not revealed.

I’ll be posting a gallery of great pictures in the next few days. I’ll also put up the full snow leopard story and some other travellers’ tales. The group dynamic? Yes. The agony of snow blindness? Yep. The will-we-get-across-the-high-pass-before-the-snow-cuts-us-off-and-we-all-perish adventure? Of course. 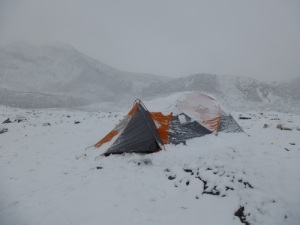